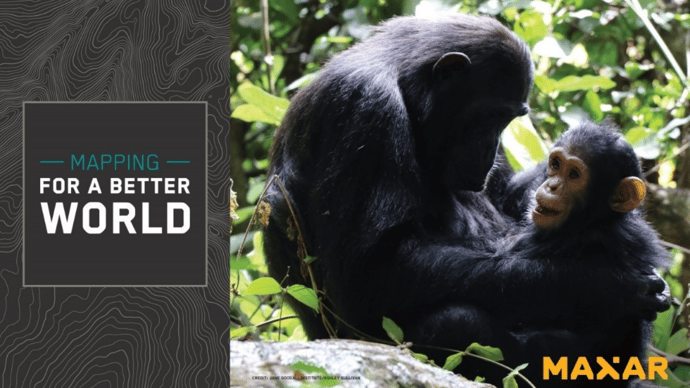 A current map is essential to supporting this endangered species. The chimpanzee range spans 21 countries from East to Central and West Africa. Having once had a population of 1 million-2 million just a century ago, chimpanzees are already extinct in three countries, and it is estimated that their population numbers are 172,700 to 299,700 in the wild.

The United Nations’ Sustainable Development Goals (SDGs) outline 17 objectives to make the world a more equitable, peaceful and prosperous place for all living beings on the planet. SDG 15, Life on land, highlights different ways to help preserve natural habitats, increase biodiversity and ensure a sustainable future for animals, like chimpanzees. The Jane Goodall Institute (JGI) focuses on community-led approaches, known as “Tacare,” which empower local communities to connect conservation objectives with ecosystem services important for their livelihoods and drive nature-based development and conservation decision-making. To achieve the goals outlined in SDG 15, it is crucial to have an accurate map of forested areas that need to be preserved, which can be used by local communities and governments in their land-use planning to protect and restore watersheds and other ecosystem services supporting people, animals and the environment. This was one of the objectives of the Maxar-JGI mapathon earlier this summer. 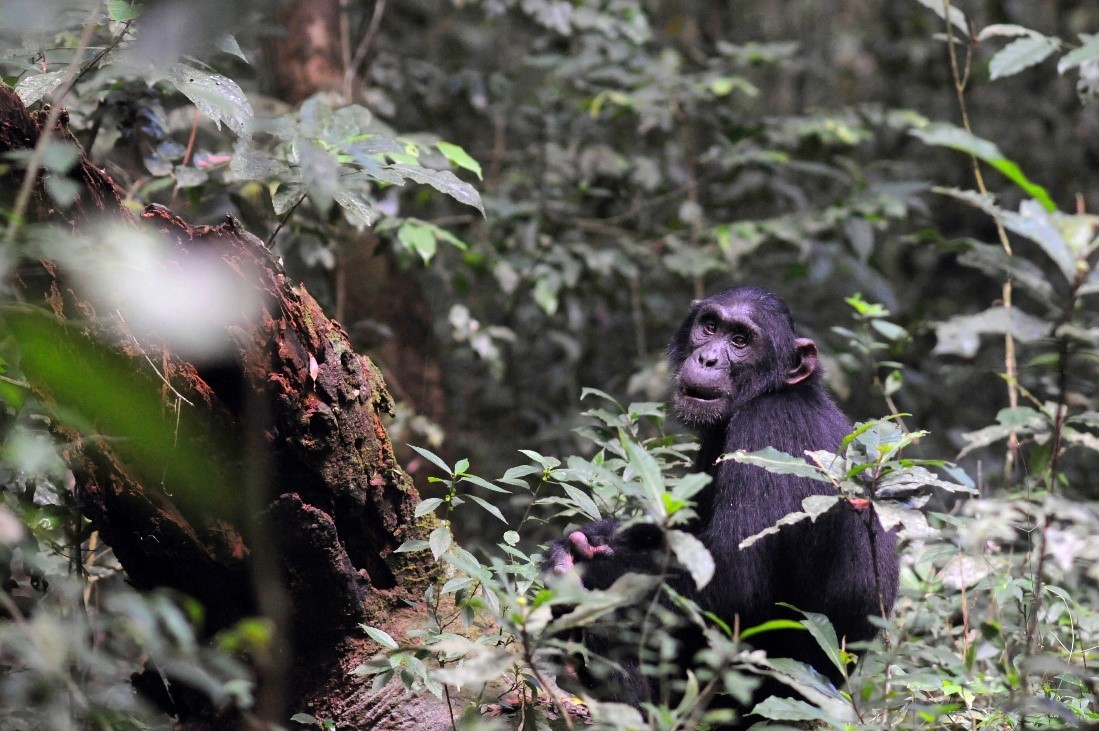 A chimpanzee in the forest in Uganda. Image credit: Jane Goodall Institute.

More than 35 Maxar and JGI team members participated in the Mapping For A Better World mapathon, working together to map an area covering roughly 9,000 sq km of the Buliisa and Hoima regions of Uganda (seen below) to support JGI’s community-led conservation work in the region. The mapathon focused on this area because it covers land important to maintain connectivity between two large forest habitats, the Budongo and Bugoma Central Forest Reserves. This land has been heavily affected by logging, agriculture, mining and development. Restoring and keeping this land forested is important because it provides local communities with access to water and other forest resources while also supporting chimpanzee communities and their connectivity to larger chimpanzee populations in the two reserves.

“JGI will share and use the updated maps with the local private forest owners, community forest monitors, government partners and other nongovernmental organizations to better understand the human footprint and to inform and measure the success of ongoing tree planting, forest restoration and protection efforts in the region” said Lilian Pintea, JGI’s Vice President for Conservation Science. 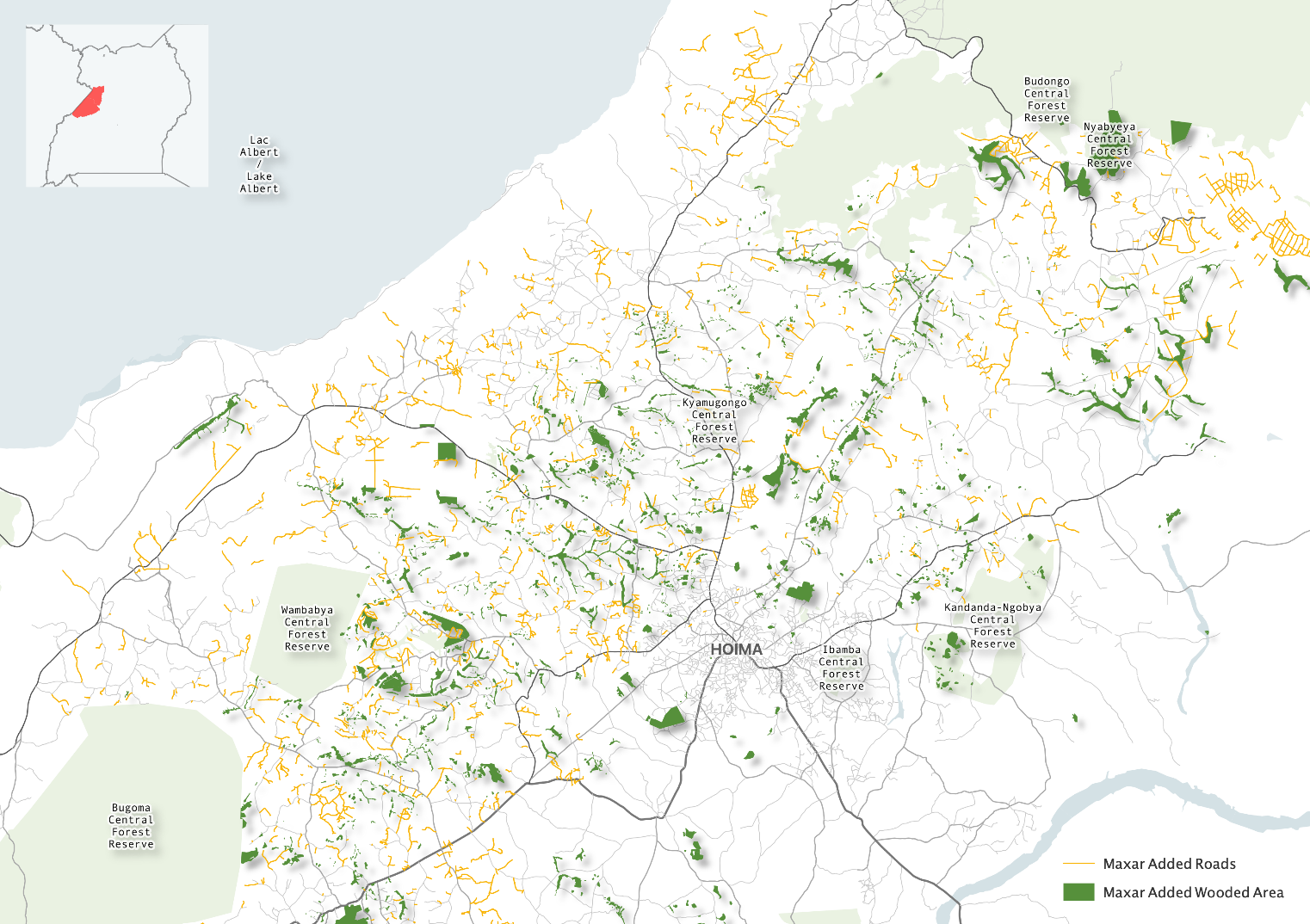 Maxar’s high-resolution satellite imagery is available as a foundational mapping layer in OpenStreetMap (OSM). Maxar’s team members in California, Colorado, Florida, Maryland, Michigan, Missouri, Texas and Virginia, as well as in England, used OSM to map 947 km of roads and over 120 sq km of forested areas over four days. They also used Maxar’s BaseVue LULC, a moderate-resolution land use/land cover dataset, and Persistent Change Monitoring (PCM), an imagery-derived data layer highlighting locations of persistent change, as guides to more efficiently direct their work during the mapathon, using the Maproulette application. Combining these two datasets gave mappers the locations of where change had occurred, eliminating the need to manually scan imagery. These edits will be available to anyone via OSM. Maxar believes its geospatial data and analytics, as well as team member expertise, can have a significant impact on the nonprofits, like Jane Goodall Institute, that are chosen as a Maxar purpose partner. These organizations reflect Maxar’s Purpose, For A Better World, and receive donations of imagery, analytics and services.

About the Jane Goodall Institute

The Jane Goodall Institute (JGI) is a global, community-centered conservation organization founded in 1977 that advances the vision and work of Jane Goodall in over 30 countries around the world. We aim to understand and protect chimpanzees, other apes and their habitats, and empower people to be compassionate citizens in order to inspire conservation of the natural world we all share. JGI uses research, community-led conservation, best-in-class animal welfare standards and the innovative use of science and technology to inspire hope and transform it into action for the common good. Through our Roots & Shoots program for young people of all ages, now active in over 50 countries around the world, JGI is creating an informed and compassionate critical mass of people who will help to create a better world for people, other animals and our shared environment.

This article was originally published on the Maxar blog here.